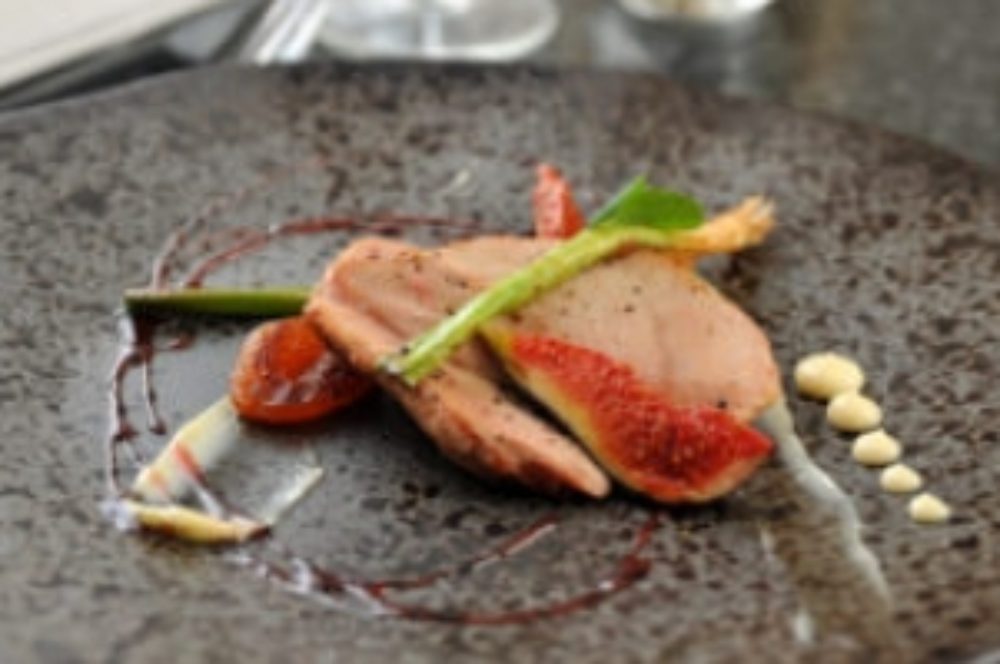 We sometimes contradict ourselves on Squidbeak; one minute we’re moaning about how jaded we are with tasting menus and the ‘small plates’ malarky, next minute we’re raving about them. The Man Behind the Curtain got our seal of approval, along with Skosh and Cochon Aveugle. We can confidently add Vice & Virtue to that list, despite first appearances.

The bin men don’t seem to venture further than the Grand Theatre at the top of Briggate, and given the number of tacky fast-food joints, expect to wade through a sea of polystyrene. Vice & Virtue is located in a rather forlorn corner building and I thought I might have to knock three times and ask for Fred. But I pushed through to find a cocktail bar, aptly named Vice on the first floor. All dark brown leather overstuffed booths, photos of naked women and a pole dancing dias, it’s not far from its original use as a strip club. But Dean the beaming mixologist works his magic and before you can say Max Clifford a Botanic G&T is on my table and things are looking up.

On the next floor is Virtue, and the vibe is slightly less Fifty Shades though it’s not entirely bling-free. But as the food arrives, you stop thinking about the wallpaper. There are three fixed menus ranging from 35 to 55 quid depending on how many courses you want. 45 quid buys you 5 plates of food, all of them faultless. Chef/owner Luke Downing is in the open kitchen with one elf and the place is full, so no mean feat.

‘Crevette’ is a single crustacea jollied up with smoked oyster mayo, delicately pickled cucumber and a mouthful of caviar – a good start. Fillet beef carpaccio follows and it’s a belter, regardless of the fact it comes in a fume-filled glass dome – usually pointless theatre but MAN the whiskey smoke actually works. Partridge breast has apricot, pistachio and blobs of intense Oloroso, which we will now call ambrosia. A second fish dish fetches up; monkfish cured in beetroot and juniper, a subtle, pink fringed delight with a less subtle but well judged hit of Wasabi. I seriously can’t remember the next plate – an occupational hazard with tasting menus – but I’ll never forget pudding. Simply called lavender, lemon, bilberry, basil, it’s a glass full of something moussey and meringuey, sharp and sweet at the same time.

If it’s fine dining you’re after and you haven’t got your name on the waiting list at TMBTC, head here. Downing’s take on contemporary cooking with seasonal ingredients makes for a memorable night out; he’s absolutely nailed the flavour/texture/colour combo and added a sprinkling of fairy dust for good measure.